Well we did it and in fine style!  The Scratch Team had one final outing this season and it couldn’t really get any bigger taking on Horsforth in the final of The Leeds and District Scratch Knockout. Moor Allerton was the venue and was in excellent condition given the deluge they received on the Saturday and prior to the start of the match!  A large following of members from Horsforth was accompanied by a great following from our members at PDGC in poor conditions!  First out was Tom Hough, who was quickly one up and playing solid was in no mood to be beaten continuing to put his opponent under pressure which would see him go 3 up, for his opponent to stage a fight back getting the deficit back to 1 hole. A solid finish would see Tom go down 16 2 up and with a routine par secure the first win with one more required to bring home the trophy! Ross Andrew was out second. Both players were making minimal mistakes with Ross 1 up thru 8 holes only for the Horsforth player to hole a superb chip seeing the match all square at the turn. Ross was 2 up thru 13 a costly mistake on 14 would hand a hole to his opponent. A tap in birdie 15 meant a win on 16 would see Ponte crowned champions. A solid 6 iron set up a par for Ross narrowly missing his birdie with the Horsforth player failing to get up and down meaning Pontefract are Scratch Knockout Champions for 2021 a superb achievement!  Andy Wiltshire was all square coming down 15, following a classic nip and tuck battle with another strong player from Horsforth and with the light going quickly both players shook hands with the match going down as a halve with Andy in prime position to capitalise likely going to go 1up!  I would like to thank everyone for their support on Sunday to witness a great night for the club that we should all be extremely proud of together, it means a lot to see our members out supporting home and away! This means that Pontefract have taken home two Leeds and District major championships this year with Andy Wiltshire landing the Seniors Championship with the Scratch Knockout now coming back to Pontefract!  Many thanks, Ross 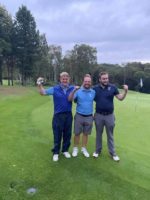