Invited members enjoyed another sparkling Autumnal day at the recent end of season Parting Shot trophy, held at the prestigious Ilkley Golf Club.  A President’s team of 12 vs. a Captain’s team of 12 played for the annual trophy inaugurated back in 2008 by then Club President, David Hartas and Club Captain Dave Cutts. Following a Covid interrupted year in 2020, the scores prior to this years event were 5 wins for the President’s team and 7 wins for the Captain’s team. My congratulations go to the President’s team for their resounding win over an out of form Captain’s team this year meaning the standings now narrow to one. The course and hospitality were once again first class. After dinner Mr Captain is seen here presenting the winning team trophy to the Club President, John Beevers. 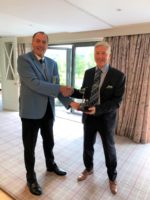